Who Was Ella Baker?

The Ella Baker Center for Human Rights is named after a brilliant, Black hero of the civil rights Freedom Movement who inspired and guided emerging leaders. We build on her legacy by building the power of black, brown, and poor people to create solutions for one of the biggest drivers of injustice today: mass incarceration.

“The major job was getting people to understand that they had something within their power that they could use, and it could only be used if they understood what was happening and how group action could counter violence…”

Ms. Baker played a key role in some of the most influential organizations of the time, including the NAACP, Martin Luther King’s Southern Christian Leadership Conference, and the Student Nonviolent Coordinating Committee.

Like her, we spark change by unlocking the power of every person to strengthen their communities and shape their future.

Listen in as we look at the life and legacy of the activist, mentor, and revolutionary the Ella Baker Center is named for. In this episode of our podcast, we speak with Dr. Barabara Ransby, author of “Ella Baker and the Black Freedom Movement” about Ella Baker’s history and vision. Also, legendary activists who organized with Miss Baker share their stories.

Ella Jo Baker was born on December 13, 1903, in Norfolk, Virginia.  Growing up in North Carolina, she developed a sense for social justice early on, due in part to her grandmother’s stories about life under slavery.

As a slave, her grandmother had been whipped for refusing to marry a man chosen for her by the slave owner. Her grandmother’s pride and resilience in the face of racism and injustice continued to inspire Ms. Baker throughout her life.

Ella Baker’s maternal grandparents bought, lived on, and cultivated land that was formerly a part of the plantation on which they were enslaved. They bought the land for $250, which they paid off in installments. This purchase was the source of great pride for their family, and they went on to become successful farmers.

Baker studied at Shaw University in Raleigh, North Carolina. As a student she challenged school policies that she thought were unfair. After graduating in 1927 as class valedictorian, she moved to New York City and began joining social activist organizations.

In 1930, she joined the Young Negroes Cooperative League, whose purpose was to develop black economic power through collective planning. She also involved herself with several women’s organizations. She was committed to economic justice for all people and once said, “People cannot be free until there is enough work in this land to give everybody a job.”

At the Ella Baker Center for Human Rights today, we continue in her legacy when we say books not bars, jobs not jails and healthcare not handcuffs. We know the prison system is the largest provider of mental health care and substance abuse rehabilitation in our country today. Prisons cannot continue to be the answer to these public health crises. Care based and community based solutions are the answer like healthcare for all, free public education, and housing as a recognized human right.

Joining the Struggle Against Jim Crow

Ella Baker began her involvement with the NAACP in 1940. She worked as a field secretary and then served as director of branches from 1943 until 1946.

Inspired by the historic bus boycott in Montgomery, Alabama, in 1955, Baker co-founded the organization In Friendship to raise money to fight against Jim Crow Laws in the deep South.

On February 1, 1960, a group of black college students from North Carolina A&T University refused to leave a Woolworth’s lunch counter in Greensboro, North Carolina where they had been denied service.

Baker left the SCLC after the Greensboro sit-ins. She wanted to assist the new student activists because she viewed young, emerging activists as a resource and an asset to the movement. Miss Baker organized a meeting at Shaw University for the student leaders of the sit-ins in April 1960. From that meeting, the Student Nonviolent Coordinating Committee — SNCC — was born. 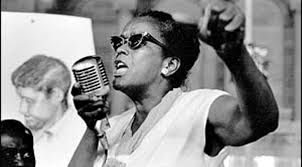 Adopting the Gandhian theory of nonviolent direct action, SNCC members joined with activists from the Congress of Racial Equality (CORE) to organize the 1961 Freedom Rides.

In 1964 SNCC helped create Freedom Summer, an effort to focus national attention on Mississippi’s racism and to register black voters.

Miss Baker, and many of her contemporaries, believed that voting was one key to freedom. Today, that is still the case: if we do not exercise our collective voice, we are unable to influence the policies and laws that impact our lives. To be counted, we must be heard.

The Audacity to Dream Big

With Ella Baker’s guidance and encouragement, SNCC became one of the foremost advocates for human rights in the country. Ella Baker once said, “This may only be a dream of mine, but I think it can be made real.”

This dream of Baker’s can continue to be made real. You can join her legacy and be a part of the Ella Baker Center for Human Rights today. In fact, you are the key to making Baker’s dream reality.

Ella Baker’s influence was reflected in the nickname she acquired: “Fundi,” a Swahili word meaning a person who teaches a craft to the next generation. Baker continued to be a respected and influential leader in the fight for human and civil rights until her death on December 13, 1986, her 83rd birthday.

Wanting to celebrate Ella Jo Baker as an unsung hero of racial and economic justice, the civil rights movement, and seeking to honor her legacy of leadership and movement building, our founders chose to name our Center for Ella Baker. Her audacity to dream big is a cornerstone of our philosophy.

We believe the best way to honor Ms. Baker’s legacy is to inspire people to imagine new possibilities, lead with solutions, and engage communities to drive positive change.  Join us and keep her story going.

Join us and build on Ms. Baker’s legacy.