Free the Vote: Unlocking Democracy for People on Parole in California

Currently, 50,000 Californians on parole cannot vote because of their criminal history. Between 1976 and 2016, the percentage of people barred from voting as a result of felony disenfranchisement laws increased by more than 500%, from 1.17 million to a record 6.1 million.

By restricting this group from voting, folks on parole are further isolated from society and limited in their power to benefit their communities through the ballot. This voter suppression is rooted in silencing Black, Brown, and low-income folks–who are consistently overrepresented in the criminal justice system–from exercising their voices in democracy. 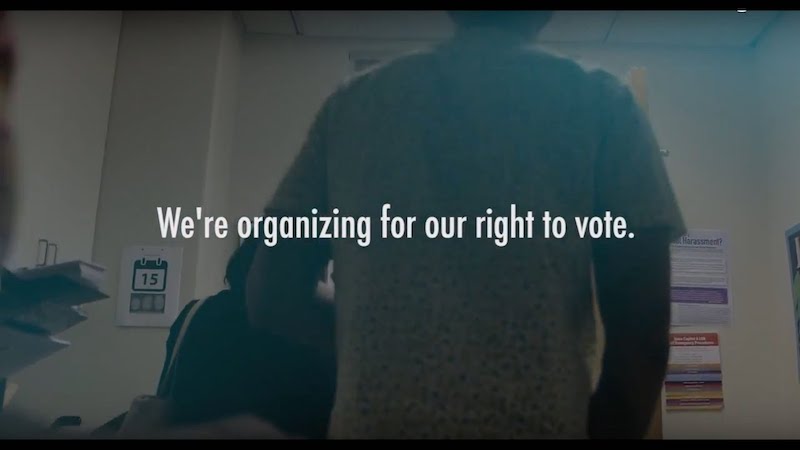 The practice of voter suppression has been used since the Jim Crow era and more actively since the election of President Obama. This is why Assembly Constitutional Amendment (ACA) 6 by Assemblymember Kevin McCarty (Sacramento) is incredibly important. It will update the California elections code to ensure that all people on parole can vote if passed in 2020.

ACA 6 recently passed the State Assembly and is on track to be included on the 2020 ballot. Still, the fight continues to get it passed through the State Senate.

Not all justice-involved folks are barred from the ballot box. People in California jails, which are run by local government and designed for those awaiting trial or serving a shorter sentence, are able to vote. Those formerly incarcerated and/or those who finished their parole are eligible to vote as well as people that are currently on probation (one is under supervision in their community instead of serving time in jail).

People on parole have been given early release for meeting certain conditions and following a set of rules, as a way to foster their reentry as a member of the community. Those on parole for a felony conviction, however, are still not able to vote despite having met these conditions and being encouraged to reintegrate into society in nearly every other capacity. The Justice Department claims that one of the key purposes of parole is that it be “oriented toward reintegrating the [person] as a productive member of society.”

Jesse, who is currently on parole, argues that preventing folks on parole from voting “hinders community from moving forward because you don’t have a say about what happens in your backyard.” Keeping people on parole away from the polls, in his view, effectively tells them that you can “come into society as a citizen but […] can’t act as a citizen.”

Voting “empowers that individual, it helps build up [their] self confidence,” Forrest, also on parole, contends. People on parole are required to pay taxes and abide by the law, so they should be able to exercise their rights as citizens to vote as well. Voting can help them shape and influence policy while understanding the direct influence that this has on their lives and the lives of marginalized groups, in particular.

The “idea that [a person on parole] cannot vote sends an idea that you’re not a part of the community,” argues Emile, who is formerly incarcerated. By preventing people from voting because they are still serving parole, “we’re still in a punishment mindset [which] is missing the point entirely,” Emile says, since the stated purpose of parole is to help folks effectively re-enter and feel welcome in their community. Civic engagement reduces recidivism and helps people feel more connected to a community.

Kelly, also on parole, cannot vote for another four and a half years. He felt that voting was particularly important for people on parole because they “know how the policy affects us and the way verbiage can be deceiving.” This unique, firsthand understanding of policy implications makes the perspective of folks on parole particularly important to be counted at the polls.

Other states have recently re-enfranchised folks on parole. The Sentencing Project reported that the Nevada Governor expanded voting rights to people on probation and parole, re-enfranchising some 77,000 Nevadans. Colorado also recently expanded voting rights to folks on parole, and Washington D.C. introduced legislation that would eliminate felony disenfranchisement entirely, adding D.C. to Maine and Vermont as the only places that allow currently incarcerated folks to vote. Also, Florida’s successful effort to re-enfranchise people convicted of felonies was driven by grassroots organizing, which played a major role in changing policy in the state.

These policy changes could result from a greater awareness of mass incarceration in recent years through the Black Lives Matter movement, books like the New Jim Crow as well as a resurgence in awareness about voter suppression after the 2016 election.

Some opponents to this bill have argued that allowing folks on parole to vote would provide them with too much freedom when they haven’t yet finished serving their sentence. However, the purpose of parole is to ensure that someone feels a sense of belonging in their community. If they are considered a citizen in every other sense, then barring folks on parole from voting is simply a method of voter suppression and isn’t actually about fostering successful reentry into society.

“Voting is not a privilege, it’s a right,” Jesse says.

The Ella Baker Center is proud to support ACA 6 and our allies that are leading the effort to free the vote in California. Show your support by writing your Senator here and signing this petition to #FreetheVote in California and ensure that our democracy actively represents all the people living in it!

To learn more, check out the Free the Vote Coalition at www.freethevoteca.org. For more information on who is eligible to vote, click here.

ACA 6 is sponsored by the ACLU of California, Anti-Recidivism Coalition, All of Us or None, Californians United for a Responsible Budget, California Secretary of State Alex Padilla, Initiate Justice, League of Women Voters of California, Legal Services for Prisoners with Children, People Over Profits San Diego, Vote Allies, and White People for Black Lives.