Community Calls for Alameda County Supervisors to #AuditAhern: “It’s Time For You All to Step Up”

As The Alameda County Board of Supervisors convened for their annual October retreat, Ella Baker Center members, advocates and family members who have lost loved ones inside Santa Rita jail marched down the block, repeating calls for a full and transparent audit of the Alameda County Sheriff’s Office (ACSO). 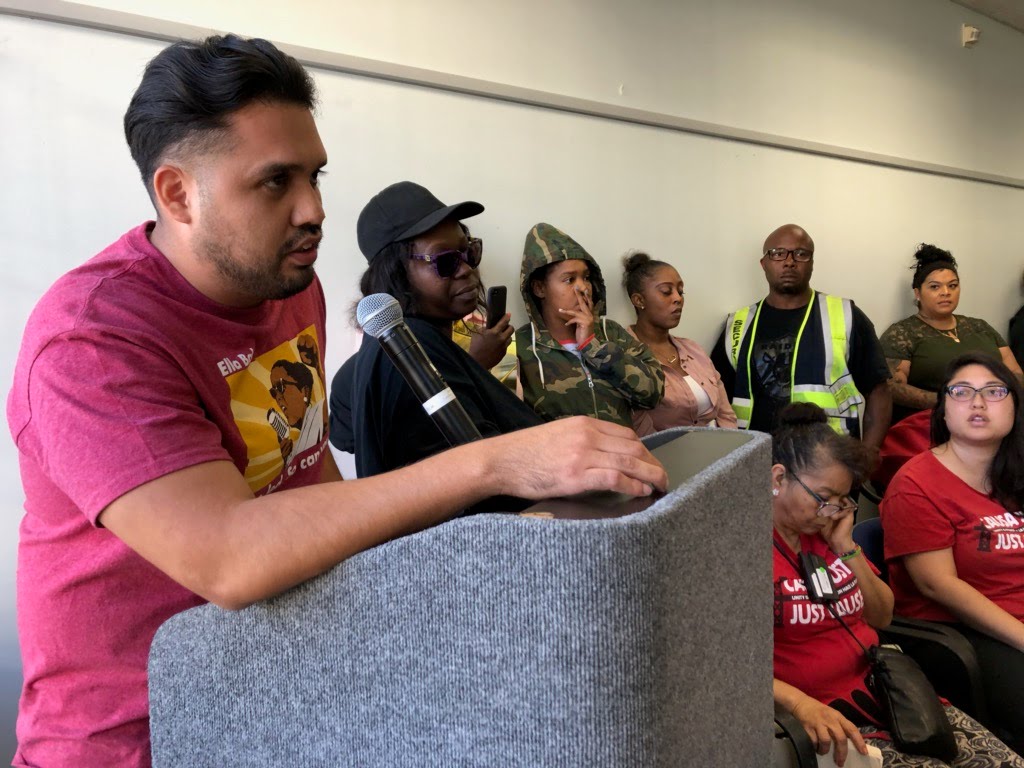 Chanting “Audit Ahern!” the crowd entered the Alameda County Training and Education Center where the meeting was held and waited for hours for the opportunity to speak directly to their elected leaders. The room was packed and as the meeting dragged on, the crowd did not dwindle. The Supervisors made a last-minute decision to cancel a scheduled training that would have ended the meeting once they saw the large number of community members still waiting to speak.

When it was time for public comment, the first voices the Supervisors heard were the families of people who have died in ACSO custody inside the notorious Santa Rita jail.

“I’m tired of speaking out — every day I have to tell the same story of my son who was murdered inside Santa Rita,” said Barbara Doss, the mother of Dujuan Armstrong, who died from asphyxiation when sheriff’s deputies used deadly WRAP restraints and a spit mask on him. “It’s time for you all to step up and do something about this. I’m not just fighting for my son, I’m fighting for everybody else’s sons and daughters and uncles and cousins.”

Amber Akemi Piatt of Human Impact Partners implored the Supervisors to finally take action after years of community members demanding accountability from Sheriff Ahern. “We needed this audit yesterday. We have been patient but our patience is wearing thin. We are giving you until the end of 2019 to vote on this and approve it. We will not let this fight drag into 2020,” she said.

Thanks to the solidarity and strength of community members, the Supervisors publicly agreed on the need for an audit of the ACSO. The Public Protections Committee will finally propose moving forward with a full financial and performance audit at their next meeting in November.

The Audit Ahern Coalition is calling for an independent auditor to collaborate with the ACSO, Department of Auditor-Controller (A-C), the County Administrator’s Office (CAO), and the Board of Supervisors, to provide an analysis and assessment that will:

1. Evaluate the sheriff’s office revenue, expenditures and contract practices  (the ACSO’s budget has continually increased while the jail population has decreased by half in the past ten years).

3. Conduct an assessment of jail conditions, including the cause and frequency of in-custody deaths.

4. Assess the long term need for jail facilities, including but not limited to consolidation and potential closure.

Stay updated on the campaign here: #AuditAhern and see how you can get involved.