The concept of justice and exactly what it means to each of us is something that we’ve all engaged with over the past few months, given our current social and political climate. Racial justice, however, is such a complex issue with so many different meanings–from the freedom to go jogging in your neighborhood, to the right to protest, to your right to a fair trial without bias or discrimination. Many of us have had to ponder it our whole lives. Alternatively, some of us have never had to ponder on the meaning of racial justice because in this country, being any race other than white means the absence of racial justice is a direct threat to your humanity.

The California Racial Justice Act, or AB 2542 (Kalra), takes a look at racial injustice within the California criminal legal system and prohibits the state from seeking or obtaining a criminal conviction, or from imposing a sentence, based on race, ethnicity or national origin. The bill plans on doing this in many different ways, ranging from prohibiting the use of racially discriminatory language during court proceedings to considering the statistical disparities in charging, convictions, and sentencing. 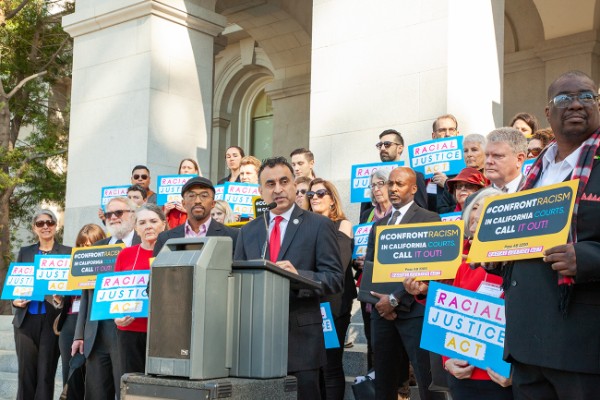 The Racial Justice Act is a countermeasure to address a 1987 legal precedent established by the U.S Supreme Court in the case of McCleskey v. Kemp. The McCleskey decision requires that criminal defendants prove intentional discrimination when challenging racism in their legal process. This standard is unreasonable given how difficult it would be to prove that the racially discriminatory behavior was targeted and deliberate.

This also neglects to account for the racism that is ingrained in the constitution of America and the implicit biases that continue to impact the lives of Black, Indigenous, and people of color every single day.

As a young Black college student, I have become even more cognizant of the racial injustice that exists in the United States, specifically in California. California is one of the worst states when it comes to systemic racial disparities in mass incarceration. In California, a Black man is over 8 times more likely to be incarcerated than a white man. This is worse than Mississippi, which has a disparity of 3 to 1, or Louisiana, which has a disparity of 4 to 1.

The racial disparity for Latinx people in California is also one of the worst in the nation. A Latinx man is almost twice as likely to be incarcerated in California as a white man – a disparity that is much worse than Texas, Nevada, or Oregon.

The Racial Justice Act would help to bring justice to those who have suffered from our unjust system, such as Shujaa Graham who was wrongfully convicted and sentenced to death after being tried by an all-white jury on two occasions. Due to the fact that the district attorney had systematically excluded all Black jurors, the California Supreme Court overturned his death sentence in 1979, and it wasn’t until 1981 that Shujaa was found innocent and released from prison. Luckily, Shujaa was able to receive some form of justice–but this should be the case for everyone who has suffered racial injustice within the criminal justice system.

The Racial Justice Act will point out and reject different biases within the court system such as explicit bias against the defendant–bias at trial, bias in jury selection, as well as systemic disparities in charging and sentencing based on race, ethnicity or national origin.

As we as a society continue to think about racial justice and how we can create a truly just criminal justice system, we can only hope that AB 2542 serves as a model for other states across the country. The statistical disparities in charging, convictions, and sentencing are a result of continued racial discrimination along every step of the judicial system, all of which contribute to harsher outcomes for people of color. These systemic issues are often unconscious and not case-specific.

Opponents of the Racial Justice Act have said that the bill is too big or that it would require too much time, money, and resources. This goes to show that racial justice and the issues that systematically affect Black and Brown people are often not viewed as significant. It is also a testament to why we need the Racial Justice Act–to give a voice to those who have been ignored and to finally hold our justice system accountable.

The California Racial Justice Act aims to address the problem at the state level and make it unlawful to discriminate against Black and Brown, Indigenous and people of color in California’s criminal legal system, even if the discrimination in question is not explicit, and especially in the circumstances where it is. AB 2542 is not only important, but it is a step that Californians must take to confront racism in our systems of justice.

For more information on the Racial Justice Act, AB 2542 and how you can support it, click here.